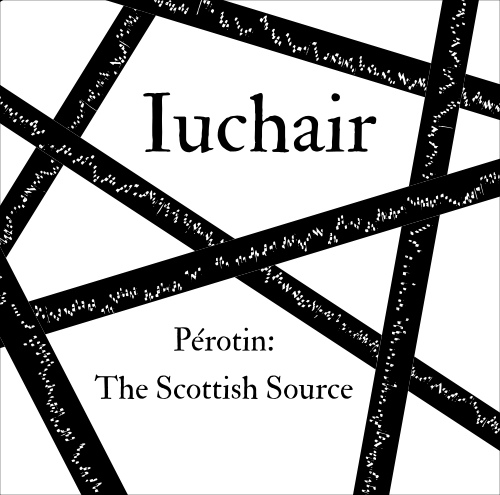 Master Leoninus…created a great book of polyphonic settings…this was in use until the time of Perotinus the great, who shortened this book…Master Perotinus composed certain excellent four–voiced polyphonic settings, such as Viderunt and Sederunt using an abundance of colouration of the harmonic art.

So writes the thirteenth–century English music theorist Anonymous IV, in the only extant account mentioning Léonin and Pérotin, making the two composers of the Notre Dame school of polyphony (so called because it is believed to have had its origins in the environs of Notre Dame Cathedral, Paris) the earliest named European composers. Recent scholarship, far from taking Anonymous IV's words at face value, suggests instead that the music of the Notre Dame school emerged not from singular compositions by two men but from a gradual oral process of improvisation, memorisation and eventual canonisation.

Nowhere is this process more apparent than in one of the larger sources of the repertory and only source of British provenance, D-W Cod. Guelf. 628 Helmst. (W1). Although now residing in the Herzog August Library in Wolfenbüttel, Germany, W1 was made for St Andrews Priory, Scotland. Even though W1 transmits much of the same repertory as the other main sources of Notre Dame polyphony, such as Viderunt omnes, Sederunt principes and Alleluya posui adiutorium (albeit with some slight differences arising from an alternate performance practice) some settings have alternate text (Alleluya optimam partem is commonly transmitted in other sources as Alleluya nativitas). Additionally, W1 transmits two settings for the feast of St Andrew that are not present in any other source: Vir perfecte and Vir iste. This is possibly due to the differences between the Christian rites in use in Britain and the continent at the time.

The repertory contained in the sources of the Notre Dame school is neither disparate nor immutable, but through the music's dispersion across Europe, it was transformed through a gradual reinvention and re-composition. For example Beata viscera, which Anonymous IV lists as being a single–voice conductus by Pérotin, is transmitted as described in all sources, except I.Bc Q11 (Bol) where the “original” has been transformed by an unknown hand into a two–voice setting.

W1 and other sources provide evidence for aspects of an oral culture having an impact on the creation of the repertory. Many differences, both large and small, between settings which appear in the different sources cannot be explained by scribal error and must have been altered by some oral process; such as improvisation, re-composition or even misremembering.

It is clear that multiple versions of the same music made their way back to the scribes tasked with documenting this repertory, as many of the larger sources contain more than one copy of the same setting. Moreover, the sources often contain whole sections of fragments of polyphony that are not directly linked with a setting. These clausulae are understood as alternate ways of performing passages of polyphony and can reliably be swapped in without issue, such as in this recording of Alleluya posui adiutorium.

The differences between W1 and the more central sources make it one of the most interesting sources of the repertory to study, and exhibits the complex, improvised and predominantly oral genesis of the music. 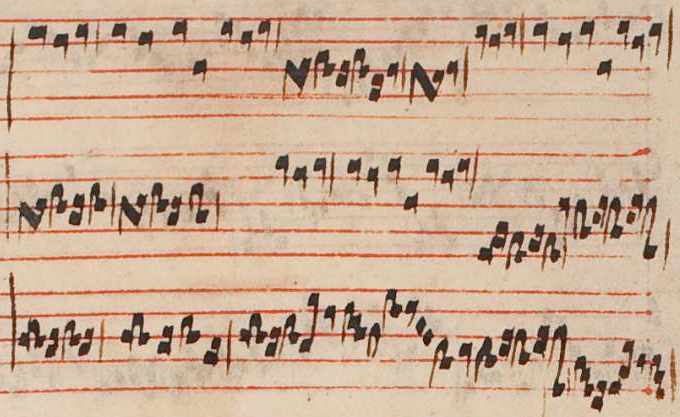 Princes sat and spoke against me, and sinners persecuted me. Help me, Lord, my God, save me through your great mercy.

Alleluia. Mary has chosen the better part which will never be taken away from her.

Verse 1 from F, other verses from Bol. Text from F.

Blessed flesh of the Virgin Mary at whose breasts the King of great name, concealing under altered guise the force of divine nature, has sealed a pact between God and man.

O astonishing novelty and unaccustomed joy of a mother still pure after childbirth.

The people of the nations huddling in darkness rise up at the joy of so celebrated a birth. Judea nurtures its resentment in the shadows, its heart bearing the knowledge of the murderous crime.

Those who drunk the dregs of the worst brew hasten at the promises of unleavened bread, they are the ones who had long stood close to God and these newest who are first.

The birth which you destroy, O wretched Judea, of him whom you denounce to us because he teaches the law. If you refuse the new law then believe the old law, in this One, whom you accuse, behold the Christ.

You always entangle yourself in the errors of your ancestors, you point the way whilst wandering aimlessly. You strew the prophetic foundations which underpin the gospel into the midst of those things which you preach.

F with concordances from Hu.

When human nature was kissed by divinity, chaste virginity was made fertile. Through the virtue of kissing, wondrous and mysterious are those kisses which gave the power of fertility without the copulation of flesh.

Alleluia. I have set my judgement over the powerful and exalted the chosen one of my people.

The Lord loved Andrew in the odour of sweetness. While hanging on the cross, he himself judged him worthy to be a martyr, the one whom he called as an apostle while he was at sea. And thus he was named a friend of God.

This most gentle man appeared among his people, Holy and full of grace.

…this was his constant prayer: this is for the people and for the city.

In return for my friendship they accuse me, but I am a man of prayer.

O man of perfect piety and lord of integrity, hear the festive prayers of your people as they celebrate. And by your prayers help to join your servants standing in your service with the company of saints in praise.

Andrew, who imitated Jesus Christ under the yoke of the cross, make us partakers of the fellowship of heaven.

O exemplary teacher of morality, whom I must exult today. Happy are the celebrations in death among the citizens of the eternal country. All is favourable towards this family, who remember the day of your victory. You give hope and mercy. We entrust ourselves to your divine grace.

Glory be to the Father, and to the Son, and to the Holy Spirit. As it was in the beginning, is now, and ever shall be.

All the ends of the earth have seen the salvation of our God. Rejoice in the Lord, all lands. The Lord has made known his salvation, in the sight of the heathen he has revealed his righteousness.

All tracks recorded in the University of Glasgow Memorial Chapel by kind permission of the chaplain, 23rd June – 9th August 2018.