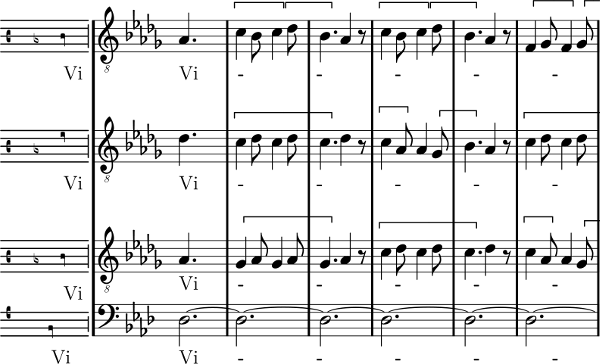 Using the magic of computers and the internet, you can instantly generate and preview your own edition of the music listed below according to your own parameters.

Edited straight from the original manuscripts and carefully corroborated with the most up–to–date academic editions, these “dynamic editions” transform from modern performance score, to academic edition, to original–notation reproduction at the click of a button! Try it now!

Customise your edition for free now!

The evils of current editions

When electing to perform early music, choosing the right edition can sometimes be the hardest step. It is well known that editions of early music are limited at best. Editions on the market today are often compiled in large, heavy and expensive academic volumes with small font and hundreds of pages of critical commentary that are more often than not useful only for academic study. Performers often must resort to making huge numbers of enlarged photocopies, risking breaking copyright law and frustrating precious time and money on cheap low–quality photocopies that are nearly always discarded after performance.

Everyone who performs early music would wish, where possible, to create their own editions of music they wish to perform, imposing their own tactus, disposition and clefs upon the music. However, the benefits of being able to perform from your own edition are often outweighed by the days and perhaps weeks of hard work a well–crafted edition requires.

Every director would love to have the time and resources to produce an edition from scratch for every piece that they perform, but pressing time and resource constraints often result in an hastily transposed and hard to read handwritten edition or a raw printout from a consumer typesetting package with an unclear layout, hundreds of clashing noteheads and slips of the fingers causing tiny mistakes that won’t crop up until the final rehearsal. If only there were a way to quickly make a professional–looking edition without tedious note typing, layout tweaking and rewriting every time you want to change something!

As if the sole purpose of this short essay, there is such a way! Choose from some set presets or answer a few simple questions and within minutes you can be previewing an edition of music, customised to your very parameters, in a pitch and meter of your choosing and including only the features you need.

Each edition has hundreds of options to choose from, including layout, size, pitch, meter, notation and even manuscript source. Every single feature can be combined with every other feature yielding a practically infinite variation, allowing you to tailor the output to perfectly line up with your criteria. You want ligature brackets? Original notation? 6/8 time? 3/4 time? At pitch? Any interval below or above? Barlines? No barlines? This manuscript? Another source? Both at the same time? Almost anything you want is possible. If not, drop us a line and we’ll probably be able to add that feature for you.

The Yockÿrr Editions server is waiting right now to generate your edition. If the edition has already been made exactly the same (unlikely but possible), you’ll get an instant preview in full. If not, just hang around for a few minutes and we’ll make it for you as quickly as possible.

Our editions are all built upon Lilypond, a fantastic professional music typesetting engine which prides itself in creating professional–looking output first time. Lilypond instantaneously generates hundreds of possible output configurations and selects the best one based upon appearance and clarity. We script Lilypond so you don’t have to, enabling, disabling and altering features of the output to create your perfect edition.

We’re committed to accuracy and a quality product. If you find something amiss in an edition, anything at all, e-mail us and we’ll fix the issue as our top priority.